In January 2013 I received a calender designed specifically for children called Barnens kalender.  It was supposed to help children understand how many days it was left until their birthday, until school was over or until next Saturday. 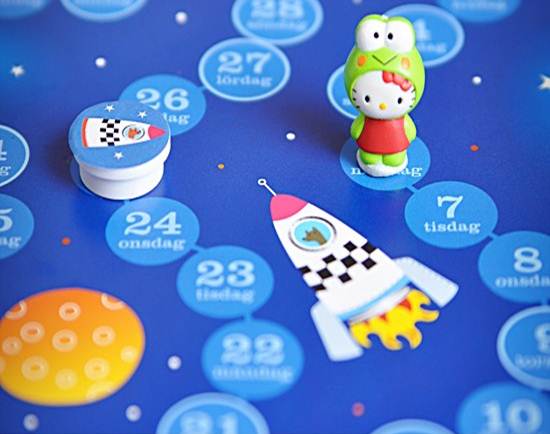 The idea with “Barnens kalender” was as simple as it was ingenious.

The solution was a large poster that fitted perfectly on the refrigerator door with every day of the year in a squiggly path.

For an adult it was understandable but for a child it was obvious.

I must admit I was a bit sceptical to the calender at first. It arrived with lots of stickers that the children were supposed to attach to specific dates, making it visible to them  when important things occurred during the year.

I thought: “Well… my children will love to put up lots of stickers on the fridge, but the calender itself will soon be abandoned and forgotten.”

I couldn’t be more wrong.

The children loved the calender. Every morning they ran down the stairs to the kitchen, fighting about whose turn it was to move the marker to the next day.

One day at breakfast, my youngest son said:

– On Friday its uncle Per’s birthday.
– Is it? I said surprised since I myself didn’t have a clue about it.
– Yes, I saw it in the calender, he said with a proud voice.

At that point I realised that the calender was magical. It really made it  easy for my children to understand what day it was today, what happens this week and how long they had to wait until Santa came to visit.

In January 2014 we received the next year’s calender for kids. Both the children and I were thrilled when we got it. A fresh year to fill with stickers that would make it easier for everyone to keep track of things that happened. 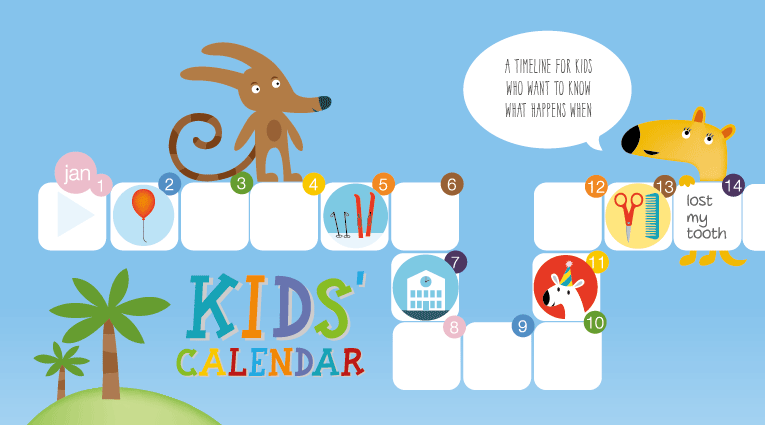 This year, the calender had been made even simpler.

It was not tied to a specific year any longer. So now, it could be used year after year. It was translated into english, now called the Kids’ Calender, so it could easily be used everywhere and not just in Sweden.

As a consequence and due to price issues, the weekdays had to be eliminated and replaced with a colour mark where each day of the week had a specific color.

Of course, my children noticed it at once.

–  There are no weekdays in this calender, my oldest son said in a disappointed voice.
–  Well, that is not so important, is it? Come on, let´s put up the stickers for this year! I said eager to get the same great experience from this calender as we got from the ealier one.

The children sat down for one hour and put up stickers for all of the events occuring this year. The sticker for uncle Per’s birthday was placed on the same date as it was in the earlier calender.

This year, there was no fighting in the kitchen about whose turn it was to move the marker. In fact, after a few days, no one even moved the marker at all.

My youngest son said to me one day:

–  What day is it today, mum?
–  Look in the kids calender, I said.
–  Well… I cant tell anymore from the calender… I don’t remember if we moved the marker yesterday or not… and since I don’t see any weekdays anymore it is impossible for me to know whether it is the 23rd or the 24th of March.
–  Actually, it is the 25th of March, I told him and moved the marker in the calender.

As my fingers slipped across the 24th of March I noticed what we had forgotten.
– Ah, yesterday was uncle Per’s birthday!

When you design and develop solutions, there will always be price and time issues that interfere with your vision of what you want to achieve. As a consequence,  you will need to do sacrificies on the way. Never sacrifice the features essential to the experience of pure simplicity in your solution.

A calender made of shiny paper with a jungle theme filled with lots of dangerous animals, but without week days, will not make it easier for children to understand what day it is. If the simplicity is lost, it doesn’t matter if the context around it is the most beautiful one on earth.

“Everything should be made as simple as possible, but not simpler.” Albert Einstein.

PS. The company behind the Kids’ Calender, Månster Design, now told me that if the calender will be redesigned, the weekdays will be back. Together with the fighting in my kitchen, I guess. 🙂